Asado is a Latin American social practice and technique for cooking cuts of meat.

It is a traditional dish of Argentina, Uruguay, Paraguay, Chile – and Brazil, where it is called churrasco.

The actual event is a social gathering with wine or beer flowing freely.

But there is a degree of ritual surrounding the cooking and presentation of food in a series of courses – not unlike there is with much Mediterranean cuisine.

An Asador mans the BBQ pit – or la parilla (charcoal grill), in which case he is called la parrillero.

Certainly in Argentina, the main star of all the available meat will always be some cut of beef – since they are reputed to produce some of the world’s best. It is cooked long and slow since it is likely to be a big slab!

Alongside there may be various other meats, cuts of pork, baby goat, chicken, sausages of various types – chitterlings or chorizo.

Which Meats to Cook (and in what order).

Traditionally a specific sequence of courses presented by the cook, something like this:

Since all that meat is enough to outface many people on its own, the side dishes are, perhaps naturally, pretty simple.

You can serve some or all of the following alongside the series of meat courses:

How to Barbeque Your Asado Meat.

The fuel used is always the local wood which gives the meat a light smoked flavor. The wood is burnt down to the embers before cooking starts.

Meats can be cooked “al asador” or “a la parrilla”. In the first case, a BBQ fire pit , surrounded by asadores – medieval-looking metal crosses that hold chunks of beef, or the entire carcass of say a baby goat splayed open to receive the heat from the fire. (Asado image thanks to rhurtubia via flickr)

With la parrilla, a height-adjustable type of barbecue grill, meat is still cooked mostly long and slow, and traditionally over wood embers which gives better flavor – though in the cities charcoal is common. 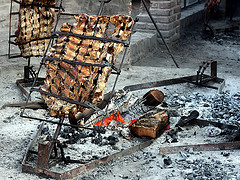 The meat, which should be the best quality you can get, is never marinated, the only preparation maybe to sprinkle with salt before or during cooking.

The heat and distance from the coals are controlled to make sure meat is slow-cooked, usually taking around a couple of hours.

The style of cooking is similar to BBQ pit roasting, except the meat is held to one side of the fire and never above it.

Note that grease from the meat shouldn’t be allowed to fall on the coals and create smoke which would catch fire and adversely flavor the meat – the area directly under the meat is kept clear of coals. Once cooked the food is usually placed in a tray to be immediately served, but it can also be placed on a brasero right on the table to keep the meat warm.

Serve it in something like the order suggested above.