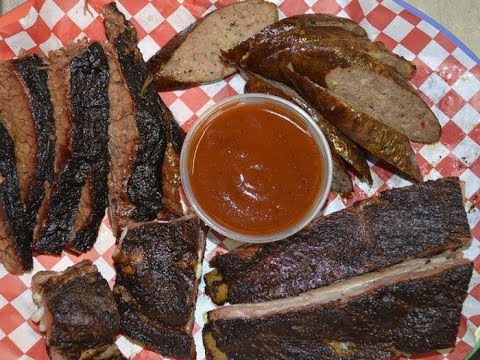 American food is really good, and the USA Barbecue has some of the best and most distinctive food I’ve ever tasted.

Barbecue is practically a way of life across a whole swathe of southern states from Texas, eastwards to the Atlantic coast (everywhere else it is merely something to do).

It’s taken pretty damn seriously, with BBQ competitions and cook-offs being hotly contended in many states. Nowhere else is there such variety and passion surrounding BBQ.

Pork is possibly the most popular choice of meat used for either pork ribs, or shoulder for pulled pork. The techniques traditionally used are hot smoking and smoke roasting. Hot smoking is where the meat is cooked with a wood fire over indirect heat, and smoke roasting is cooking over a wood fire at slightly higher temperatures. The longer, slower cooking process, taking anything up to 10 hours for a whole pig, leaves the meat meltingly tender and juicy.

Since the wood smoke flavors the food, not just any wood will do; different woods impart different flavors, so the availability of various woods for smoking influences the taste in different regions.

The last ingredient, in some places optional and most definitely not in others, is BBQ sauce .

USA barbecue sauces vary from clear, peppered vinegar to thick, sweet, tomato and molasses sauces, from mild to almost painfully hot. The sauce may be used as a marinade before cooking, applied during cooking, at the end of cooking, or used as a table or dipping sauce.

An alternative to BBQ sauce is the dry rub, a mixture of salt and spices applied to the meat before cooking.

The patchwork of regional USA barbecue styles reflects the successive waves of immigrants over the last couple of centuries.

The native Indians of the Gulf of Mexico and the Caribbean region had something called “Barbecoa” which was passed on to and reshaped by the Spanish, French, German, British, and African newcomers and spread through North America and back to Europe.

The four most commonly acknowledged USA barbecue styles are from Texas, Kansas City, Memphis, and The Carolinas – there are many. There is even regional variations within these areas, and too many permutations between them to list here.

Here are the main ones:

Texas on its own has four variations derived from the various groups of settlers who arrived in previous centuries. The East Texas-style uses cuts such as pork shoulder or ribs, slow-smoked over hickory wood. Meat is served with a beautiful, thick, sweet tomato sauce.

Central Texas BBQ is influenced by the Central European and German settlers who arrived in the 19th century bringing their tradition of smoking food. Leftover cuts of pork and beef are smoked, with high heat, using oak and pecan wood – served without a sauce, but with soda crackers, pickles, and onions.

The border area and southern Texas-style is heavily influenced by Mexican tastes. The area was the birthplace of the Texas ranching tradition, and the Mexican farmworkers were partially paid for their work with cuts of leftover meat.

Around Memphis the meat primarily ribs, which can be made “wet” or “dry”. Wet ribs are brushed with sauce before and after barbecuing, and dry ribs are instead seasoned with a dry rub. Pulled pork from the shoulder, is also popular, served smothered in hot, sweet tomato sauce or a mustard-based sauce, depending on the area.

The awesome Kansas City BBQ sauce is the signature ingredient from around these parts. The meat is smoked with a dry rub, and the sauce served as a table sauce. Kansas City style BBQ sauce is thick, sticky and sweet and made with tomatoes and molasses. It’s the real finger-lickin’ good stuff.